Depicting our medieval past

The paintings on the south wall date from around 1300, and are among the finest wall paintings in Britain. They are older than the earliest English painting in the National Gallery, and are unusual in telling graphic short stories rather than scenes from the Bible or the Last Judgement.

A careful comparison of the costumes has revealed that they were all painted at around the same time.  But probably by different artists.  Covered with whitewash at the Reformation around 1550, when the Protestants did not approve of paintings, statues or coloured glass, the wall paintings were rediscovered in the 1860s.

The History of the Wall Paintings

A travelling painter, perhaps trained in a monastery, would have been hired to decorate the freshly plastered walls.  In his bag he would have carried, not only brushes and pigments, but also scrolls of illustrations of potential paintings.  Once the subject was chosen (why did the de Gatwyck family chose this particular selection?) the painter would set to work to enlarge his small original. Traces of lines, vertical and horizontal, still remain.  Their survival is probably due to the lines having been drawn using a pigmented string held taut against the fresh plaster.  Onto a preparatory layer of limewash the painter then sketched out the main outlines in red ochre, filling in using red and yellow ochre, amber, charcoal black and limewhite. 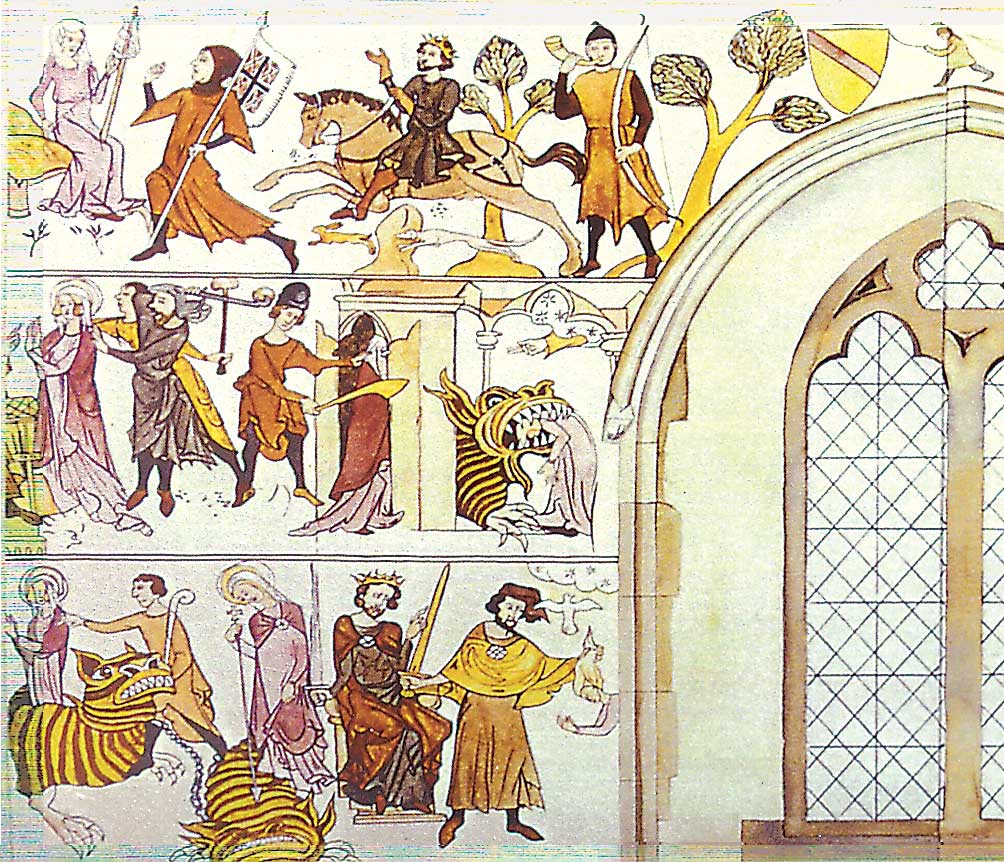 The Story of St Margaret

The painting to the left of the pulpit tells the story of St Margaret, one of the most widely venerated saints of the early Church.  She was the guardian of women in childbirth and hers was one of the ‘voices’ that spoke to Joan of Arc.  In the modern idiom, she was an early ‘Me Too’ character, an innocent girl dominated and abused by a wealthy and influential man.

The painting shows Margaret sitting demurely spinning wool as she minded the sheep. The pagan governor of Antioch, Olibrius, is out hunting, with his greyhound in pursuit of a hare.  This is believed to be the earliest picture of a greyhound in England.

Behind him is his huntsman, blowing his horn.  In front strides a herald bearing his master’s standard, sent to ask Margaret’s hand in marriage - - or perhaps a more immediate assignment!  Margaret was, however, a good Christian, and firmly said ‘no’.

In the centre row of the painting Margaret is seen being cruelly beaten, the faces of her torturers being painted with ugly features to show their evil status, and then thrown into prison.  The devil arrives in the form of a dragon and tempts her to end her sufferings by submitting to the lord’s desire.  She, however, resists temptation and is shown being swallowed by the devil-dragon – although with the hand of God above.

In the lowest tier of the painting Margaret is depicted emerging from the dragon’s belly having made the sign of the cross in its stomach.  She is shown in her traditional pose standing triumphant over the body of the devil-dragon, staff in hand.

The final scene (bottom right) depicts her martyrdom.  Olibrius sits in judgement, and orders her decapitation. The huge sword of the executioner was a symbol of medieval justice. This sad end to the story appears somewhat inconsequential but was explained by a French preacher in 1681 as showing God’s respect to the system of justice. More likely it merely shows that in medieval times when the local lord was also the judge, it was a mistake to thwart his wishes.

Alas for the Saint! But the dove flying heavenward represents her innocent soul flying up to heaven.

St Nicholas and the Butcher

To the right of the pulpit the upper painting shows the miraculous resuscitation by St Nicholas, the patron saint of Charlwood church, of three scholars who had been cut up and salted for pork.  The pork butcher and his wife stand to the left, looking evil, with St Nicholas to the right.  Above the boys the hand of God emerges from a starry cloud.

Above this picture, to the left, there is a knight in armour.  Perhaps one of the De Gatwyck family who was killed on the crusades.

The Three Living and the Three Dead

The lower painting is of the Three Living and the Three Dead.  This story is taken from an old French moralité written c.1290.  It relates how three noble youths hunting in a forest are met by three hideous spectres, images of death, from whom they receive a lecture on the vanity of human grandeur.  The skeletons say: ‘As you are, we were; as we are, you will be.’

This subject is found in fourteen other churches in England, but this is the only one where the princes, wearing crowns, are on horses.  Two of the princes have hawks on their wrists.   It was much in use at the time of the Black Death in 1348 but the Charlwood picture may have been painted before then.

In the 15th century the paintings to the right of the pulpit were covered in limewash, and a large new painting, of the martyrdom of St Edmund, was superimposed.

Edmund, born 841, was King of the East Angles.  In a great battle against the Danes in 869 he was captured, tied to a tree and shot with arrows until his body was ‘like a thistle covered with prickles’.  Edmund was soon revered as a martyr, and his body was enshrined at Bury St Edmunds.

In the Charlwood painting there is now no sign of St Edmund: only the archer remains (but without his arrow).  A clue to the date of the painting is that the archer’s shoes are of a type that remained in fashion until the 1480’s.  It is a mystery that the painting does not seem to leave much room for St Edmund, also that when the whitewash was removed in the 1860s all traces of Edmund were removed, leaving the earlier paintings intact.

There are signs that there may also have been a painting of St Christopher, above the door.  That was the traditional place for the patron saint of travellers. 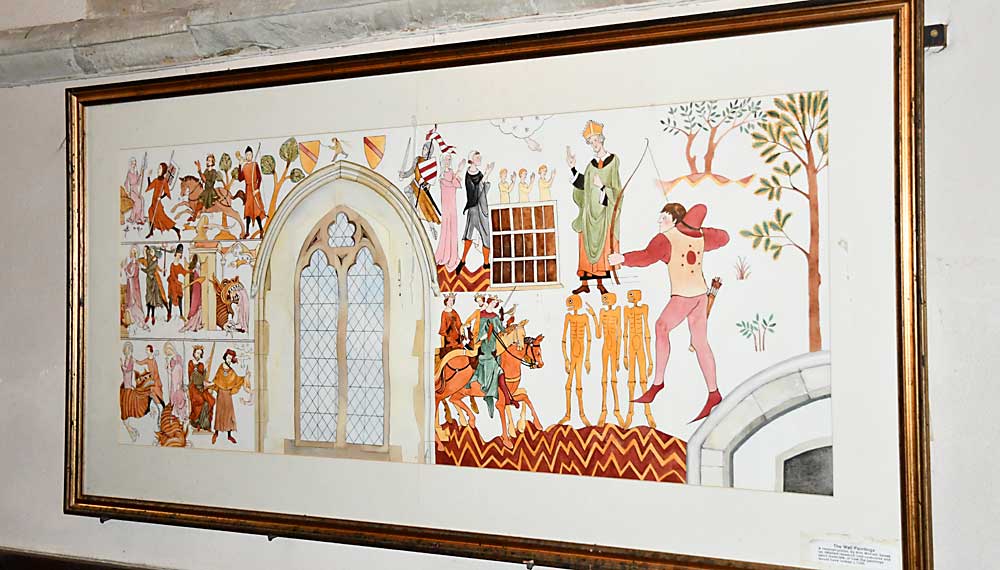 Based on detailed research, an art historian, Ann Worrall, has painted a picture of the murals as they would have looked when first painted 700 years ago, and this picture hangs at the back of the church.