St Nicholas' Church through the centuries

At the centre of Charlwood for nearly 950 years

Part of the church was built in around 1080, only fourteen years after the Battle of Hastings, and before most of the English cathedrals.  Still surviving from Norman times are the north wall with its small Norman window, the Norman arch and the tower.  The building must have been done by Saxon workers to the design of a Norman architect but why such a comparatively large church was built in what was then a boggy and impassable part of the Weald remains a mystery.[1]

Charlwood must have been an important village, perhaps based on iron working.  It was an outlying parish in the Canterbury diocese, but a rebellious one:  in 1170, four days before he was murdered in Canterbury cathedral, Archbishop Thomas Beckett excommunicated the Rector of Charlwood.

A new aisle was added on the south side in 1280 (the part of the church between the main door and just beyond the pulpit), possibly built by the de Gatwyck family who lived at Gatwick Manor (now under the North Terminal).  The solid oak door is still in use.  The upper hinge was made at that time from local iron. Behind the pulpit a stone piscina, used for washing the communion vessels, marks the site of an altar. 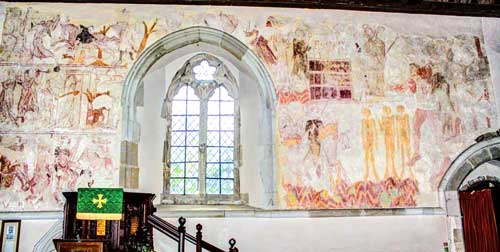 The paintings on the south wall date from around 1300, and are among the finest wall paintings in Britain.  They are older than the earliest English painting in the National Gallery, and are unusual in telling graphic short stories rather than scenes from the Bible or the Last Judgement.

A careful comparison of the costumes has revealed that they were all painted at the same time, around 1300.  But probably by different artists. Covered with whitewash at the Reformation around 1550, when the Protestants did not approve of paintings, statues or coloured glass, the wall paintings were rediscovered in the 1860s.

Based on detailed research, an art historian, Ann Worrall, has painted a picture of the murals as they would have looked when first painted 700 years ago, and this picture hangs at the back of the church.
READ MORE....

[1] One theory is that the church may have been built to enforce Norman rule over local Saxon resistance. Read:  A SAXON SPECULATION.

In 2017-18 a series of lectures on the history of the church was given by Brendon Sewill, a local amateur historian.  You can watch them here:

Details of the gravestones in the churchyard can be found at https://www.gravestonephotos.com/public/location.php?area=Surrey&country=En&location=Charlwood
It is hoped that a volunteer can be found to add a plan of the graveyard to that website.

A list of gravestones and their inscriptions was compiled in 1970 and it is hoped that a volunteer can be found to put it on this site.

The classic history of Charlwood (including St Nicholas’ Church) The Freemen of Charlwood, was written in 1950 by Ruth Sewill and Elizabeth Lane.  With a postscript covering the years to 1980, it is available online at http://www.charlwoodsociety.co.uk/resources/The%20Free%20Men%20of%20Charlwood.pdf

We apologise in advance for the poor video quality, but we thought you might like to see St Nicholas’ Church, Charlwood celebrating it's 900th year anniversary back in 1980.

From these talks, a small group of villagers came together to delve into the Church history with the clear instruction, “No one is to do anything unless we are having fun”. The Charlwood Church Research Group is secular and consists of people who come from diverse backgrounds who are deeply interested in the history of Charlwood Church.

In 2019 the research group succeeded in obtaining a grant of £9,200 from the National Lottery Heritage Fund. Outlined here are the various projects, each designed to expand public interest in Charlwood church: 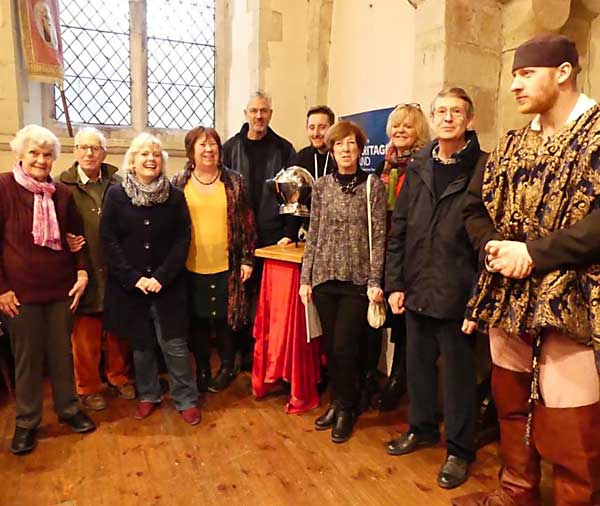 The continued aim of the group is to share and learn about the Church history. By focusing on certain areas, we hope to rekindle interest in its heritage and present it afresh to the community.