Sir Nicholas Saunders' funeral helmet or to give its correct name, funeral close helm, hung for hundreds of years in St Nicholas Church before being stolen in 1975.

The story starts back in 1480 when his father, Richard, died aged only 30.  Richard’s wife, Agnes extended the south aisle of Charlwood church by building a chantry chapel (now the choir stalls) a private chapel where the priest said daily prayers to speed Richard’s soul through purgatory to heaven.  You can still see Richard’s initials RS. RS. RS. RS  on the screen separating the chapel from the rest of the church.  When his mother Agnes died, Nicholas took on the responsibility of finishing the building work.

Nicholas Saunders lived what we believe to be a quiet life at Charlwood Place, now Lory’s farm. The beautiful brass memorial on the wall of the church on the right of the altar commemorates Sir Nicholas. The brass depicts Nicholas, his wife Alys, his 4 sons and 6 daughters. Sir Nicholas was nearly 80 years of age when he died in 1553.

His family would have organised the making of the funeral helmet; it was customary for the knightly insignia of the deceased; helmet, tabard, gauntlets, sword, spurs, and shield, to be carried behind the bier and later hung above the tomb.  The helmet was probably on his coffin at the funeral service. The remains of Sir Nicholas are believed to be under the chantry floor.

The helmet hung for over 400 years, to the left of the altar, before being stolen in 1975. After a long search across the country, it was recovered by the police in 1977 and decisions were taken to keep it safely in Guildford museum.

Now, after a successful funding bid from the National Lottery Heritage Fund an exact replica of the funeral close helm has been placed back on the original hook. 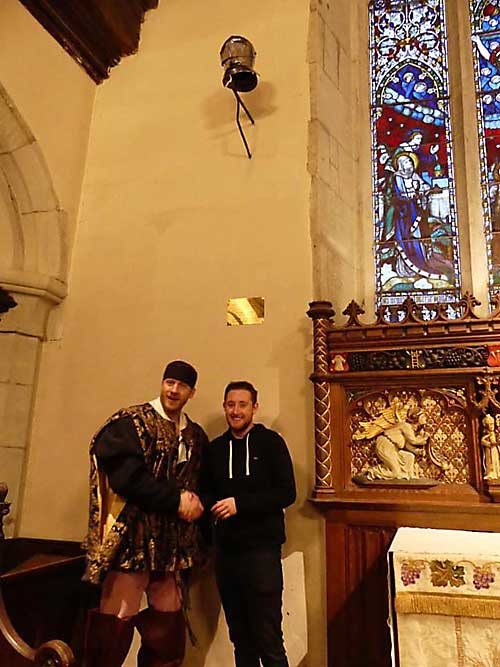 Reef Gaskell, a local Blacksmith was commissioned to make the replica helmet.  At the time Reef was just completing the final year of his Blacksmithing & Metalworking course at Plumpton College (he passed with Distinctions) when he took on this challenge.

Jon Kocel, a successful and accomplished Armourer was approached to join the project with Reef and together after much blood sweat and tears, a truly great artefact was created.

At the end of January 2020 two events were held to mark this special moment.

The first was a workshop session at Charlwood Village School, set up by two members of our group Davida Hall & Julie Patton.  30 pupils were privileged to be the first to view the replica helmet. An enjoyable afternoon was spent learning about history, armoury and the process of making this replica helmet from Jon and Reef. The school children completed the session having fun making their own paper helmets with Julie who is an Art Teacher. 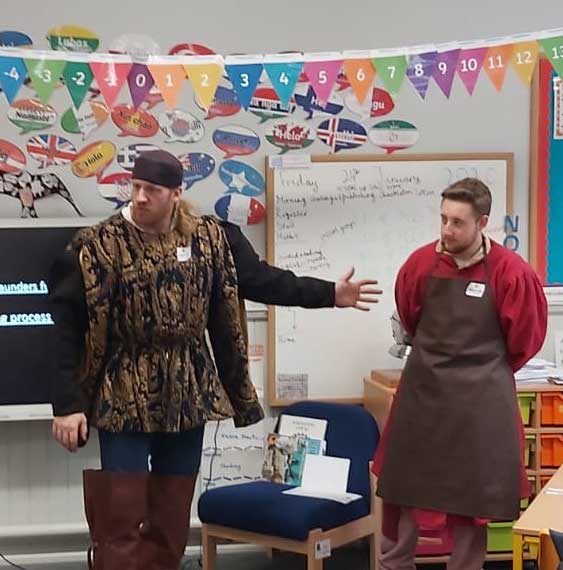 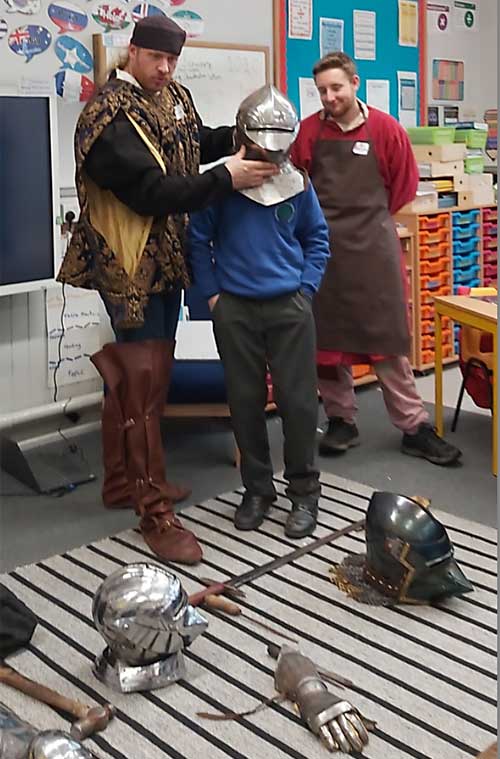 The following day, there was a well attended public event at St Nicholas' Church to celebrate this remarkable occasion with armoury, song and cake.  Jon and Reef gave an excellent presentation;  it was a very emotional moment when Reef secured the helmet back in its rightful place and part of the heritage of the church was restored.

We hope this replica helmet will hang in the church for at least another 400 years. 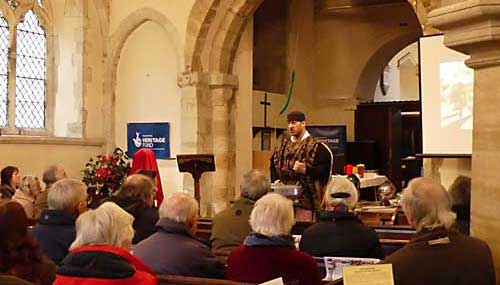 You may remember local search parties were organised and people scoured the district in hope of finding the helmet. It appears to have been stolen by semi professionals and wandering from Brighton to Lewes, to Batley (Yorks), to Dewsbury County Court, to the Victoria and Albert Museum and after many legal wranglings, the helmet arrived safely at Guildford Museum where it is now on display today. All this apparently for the sake of £20. 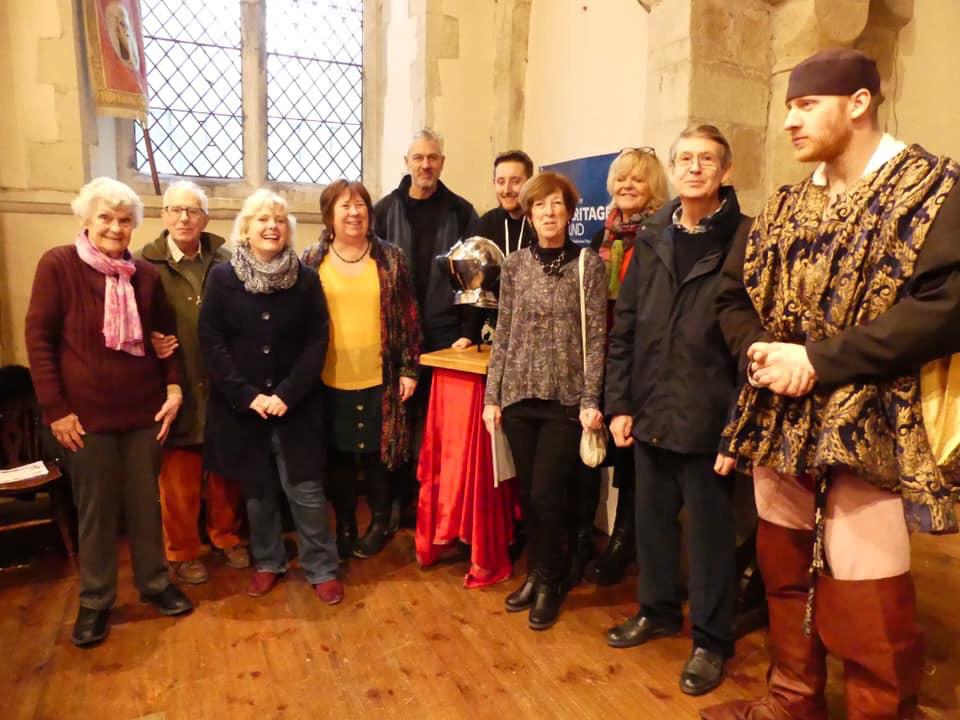 Information from Guildford Museum / Blog on their website 02 March 2020

This month on our blog we are sharing a story of the Charlwood Church Research Group (a sub committee of The Charlwood Society), who were keen to reinstate a part of their village history using one particular object which is usually on display in our Museum - the Funeral Helmet of Sir Nicholas Saunders from St Nicholas Church in Charlwood. 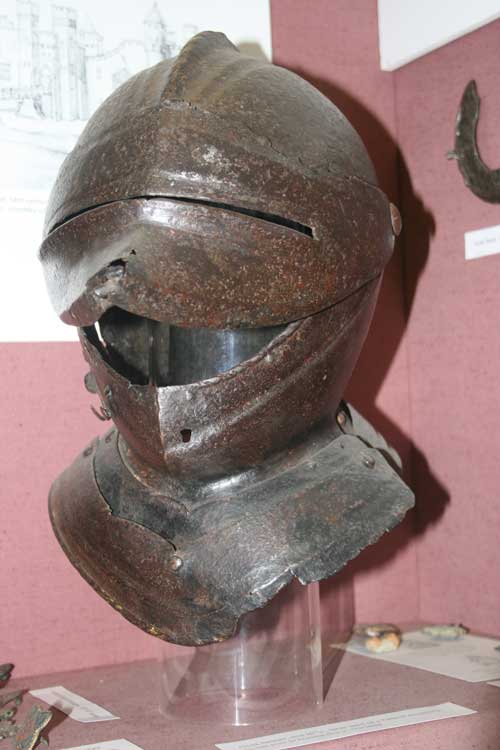 The helmet is probably a funeral relic because of the crest spike and its date is given by the Armouries of H.M. Tower of London to be around 1550.  It was customary for the knightly insignia of the deceased (helmet, tabard, gauntlets, sword, spurs and shield), to be carried by the heralds and later hung above the tomb. Usually painted a dark slate colour with gilt floral decoration, these helmets had the crests carved in wood and were painted in heraldic colours attached to the spikes.

This helmet was gilded on some of its more prominent edges and on the ridges at the top. It discoloured over time but would once have been silver in colour. The inside has been treated with something, that blackened in colour over time and has given it an uneven surface. It is possible, that the outside was at some point coated with the same substance, which could account for its dark colour. Some discolouration would be natural, as the metal tarnished with age, so it is hard to be able to attribute any colour-change completely to past restoration work.

There are two pins on the helmet securing the visor which were probably replaced in its more recent history. In fact, this could have happened in the past 50 years because of the materials used (including plastic!). Could the helmet's visor have been fixed when it was stolen from the church, to make it more saleable? A working helmet is more exciting than one that doesn't work!

The replica helmet installation event took place on 25th January 2020 at St Nicholas Church in Charlwood. The event was very well attended. Everyone from the Charlwood Church Research Group worked so hard on the project and we, as well as the audience, could sense the passion and dedication to local heritage. The suspense was high at the unveiling and there was a lot of excitement when the replica finally took its rightful resting place at the church. 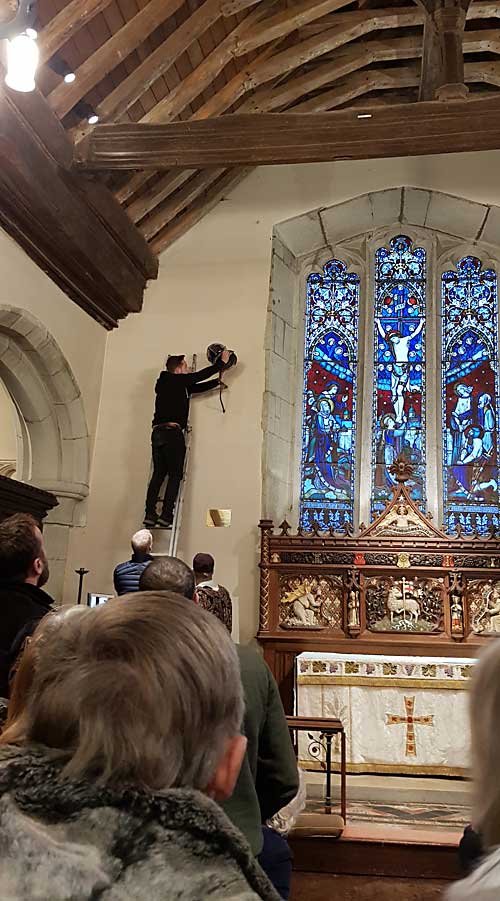 We were delighted to participate in this project and to see how the history of one object could bring social engagement, collaboration and above all, a celebration of the past for many generations to enjoy!

The raising of the bowl... 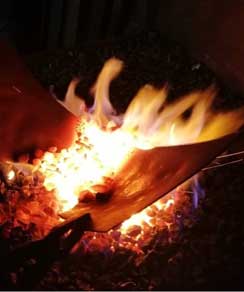 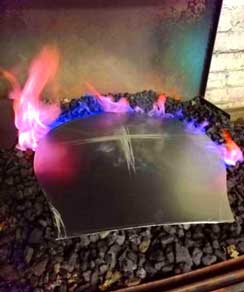 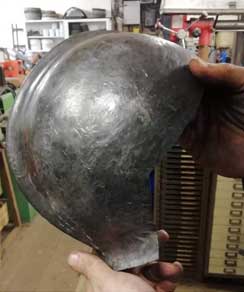 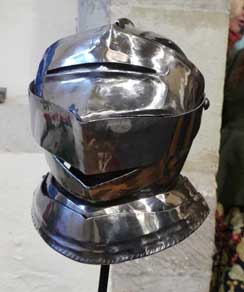