Part of the church was built in around 1080, only fourteen years after the Battle of Hastings, and before most of the English cathedrals.  Still surviving from Norman times are the north wall with its small Norman window, the Norman arch and the tower.  The building must have been done by Saxon workers to the design of a Norman architect but why such a comparatively large church was built in what was then a boggy and impassable part of the Weald remains a mystery. [1]

Charlwood must have been an important village, perhaps based on iron working.  It was an outlying parish in the Canterbury diocese, but a rebellious one:  in 1170,  four days before he was murdered in Canterbury cathedral, Archbishop Thomas Beckett excommunicated the Rector of Charlwood. 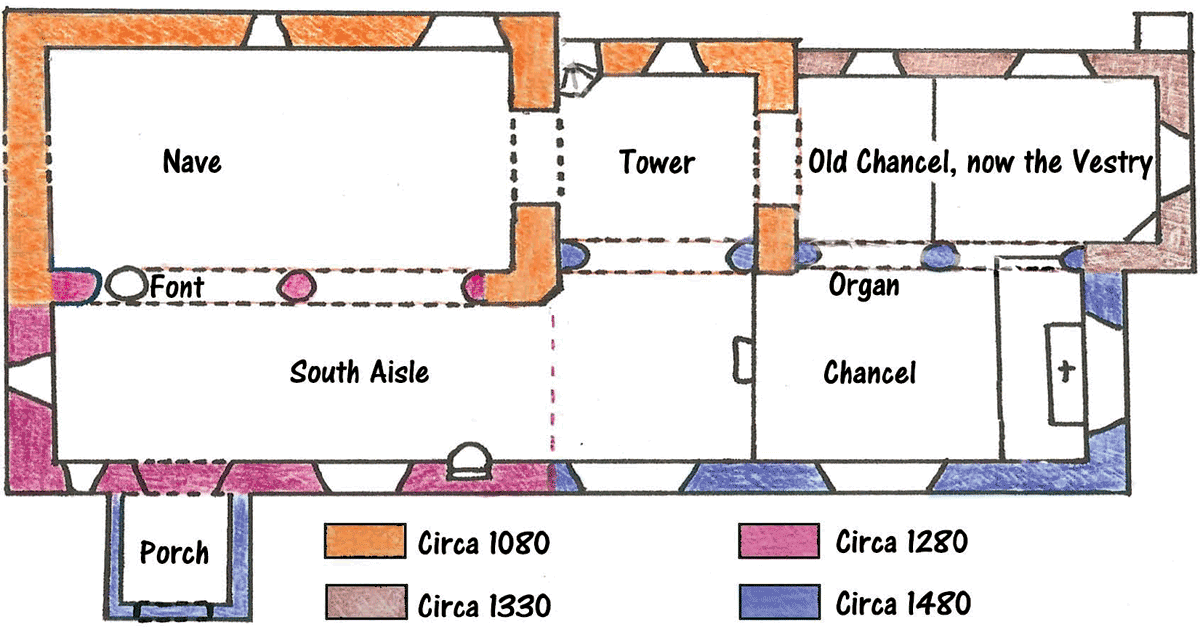 A new aisle was added on the south side in 1280 (the part of the church between the main door and just beyond the pulpit), possibly built by the de Gatwyck family who lived at Gatwick Manor (now under the North Terminal).  The solid oak door is still in use.  The upper hinge was made at that time from local iron. Behind the pulpit a stone piscina, used for washing the communion vessels, marks the site of an altar.

This new aisle was enlivened by wall-paintings telling the stories of St Margaret who was swallowed by the devil in the shape of a dragon; of St Nicholas rescuing the three boys; and of the three princes meeting three skeletons. At a later date a new painting, of St Edmund, was added, of which only the archer remains.

In around 1330 a new chancel (now used as the vestry) was added with a fine wooden roof, the oldest woodwork in the church.

The Saunders family lived at Charlwood Place (now a farm).  In 1480 Richard Saunders died aged 30.  His mother and widow extended the south aisle by building a chantry chapel in which a priest said daily prayers in the expectation of speeding Richard’s soul through purgatory to heaven.  The magnificent screen separating the chapel from the rest of the church is the only sizeable piece of medieval wood carving in Surrey.  The upper part, featuring the initials R.S., was probably around Richard’s tomb. 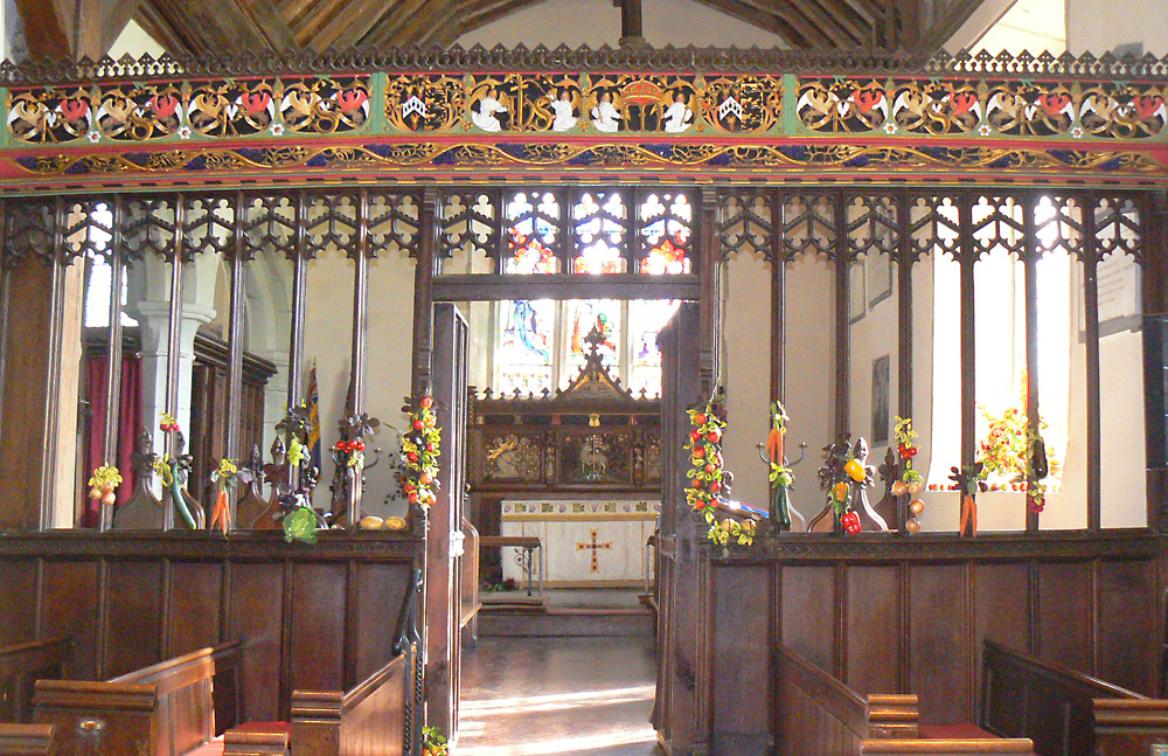 At the same time that the chapel was built, the church – originally thatched – was given a splendid new crown purlin roof.  New arches opened up the two sides of the church.

A brass near the altar commemorates Richard’s son, Nicholas Saunders, his wife Alys and their ten children. When Nicholas died in 1553 his funeral helmet was placed on a hook above the altar.  It was stolen in 1975, recovered and placed in the Guildford Museum.  An exact replica was replaced above the altar in 2019. 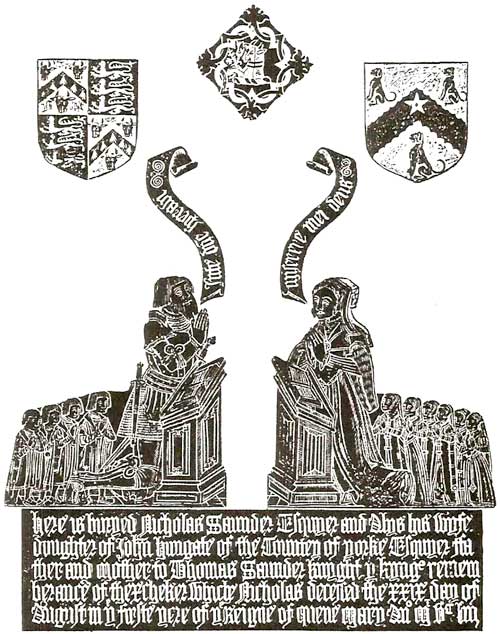 During his time at Court, Thomas saw big changes:  the break from Rome and the change to Protestantism, then back to Catholicism under Mary, and under Elizabeth to what we now know as the Church of England.  These were reflected in his home parish of Charlwood with the removal of any sign of idolatry or superstition - the wall-paintings whitewashed over, the chantry chapel abolished (becoming the Saunders’ private family pew), the stained glass windows broken (some fragments of old glass can be seen at the top of two windows), statues pulled down and the holy water stoop in the porch broken. 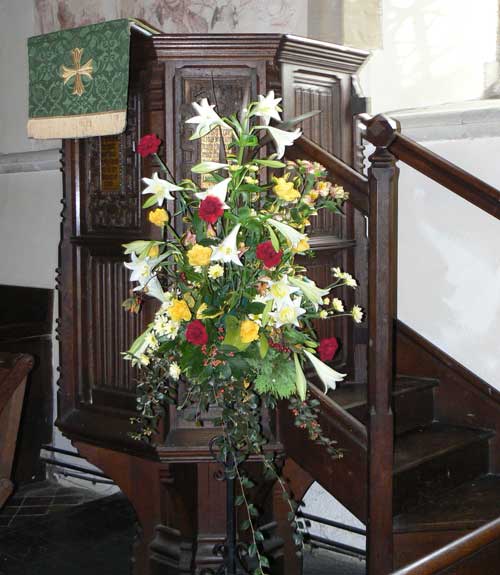 The Tudor years were a time of prosperity for Charlwood – probably based on charcoal and iron - with many small open hall houses built (twenty-eight remain, more than in any other village in Surrey. The oldest - the cottage opposite the Half Moon - dates from 1402). 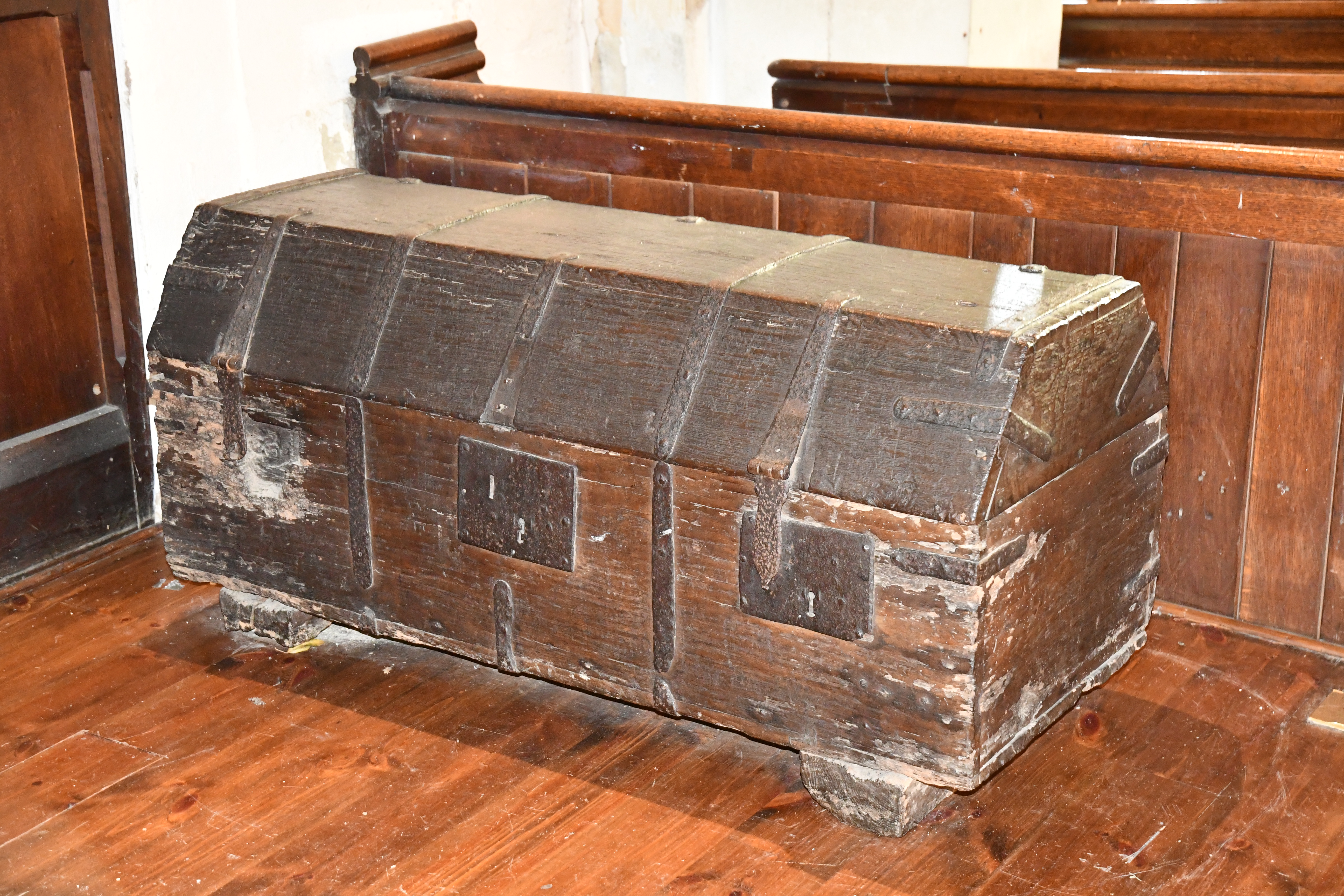 The muniment chest (under the tower) may have been made in 1539 to house the parish registers which all churches were required to keep from then on.

At the time of the Civil War, Charlwood had its own battle - as to who should sit in the best pew!  The Jordan family, who had lived in Charlwood since 1300 (some of their descendants still do), had become rich and were living at Gatwick Manor.  They went to court to demand the right to sit in the Saunders’ private pew - but were only awarded three seats!

It was probably during the Civil War that Charlwood Place was burnt down.  The Rector, Thomas Mulcaster (who had married a Saunders daughter) was accused of being a High Church Royalist, and evicted.   When Charles II was restored to the throne in 1660, Mulcaster was re-instated and – perhaps to celebrate the end of Puritan austerity - the tower was raised and new bells installed.

Charlwood fortunately escaped the Victorian tendency to rebuild old churches.  Instead in 1858 the Rector, Thomas Burningham, decided to transform the internal layout.  The altar was moved from the north aisle to its present position in the south aisle; the minstrels’ gallery at the back of the church (built in 1716) was pulled down; an outstanding Holdich organ was installed (and is still in use); the vestry was created in the former chancel; the present pews, with their unusual collegiate format, were put in place; the former private chapel was converted into choir stalls; and the wall-paintings were rediscovered and revealed.  Most of the stained-glass dates from 1860-70. 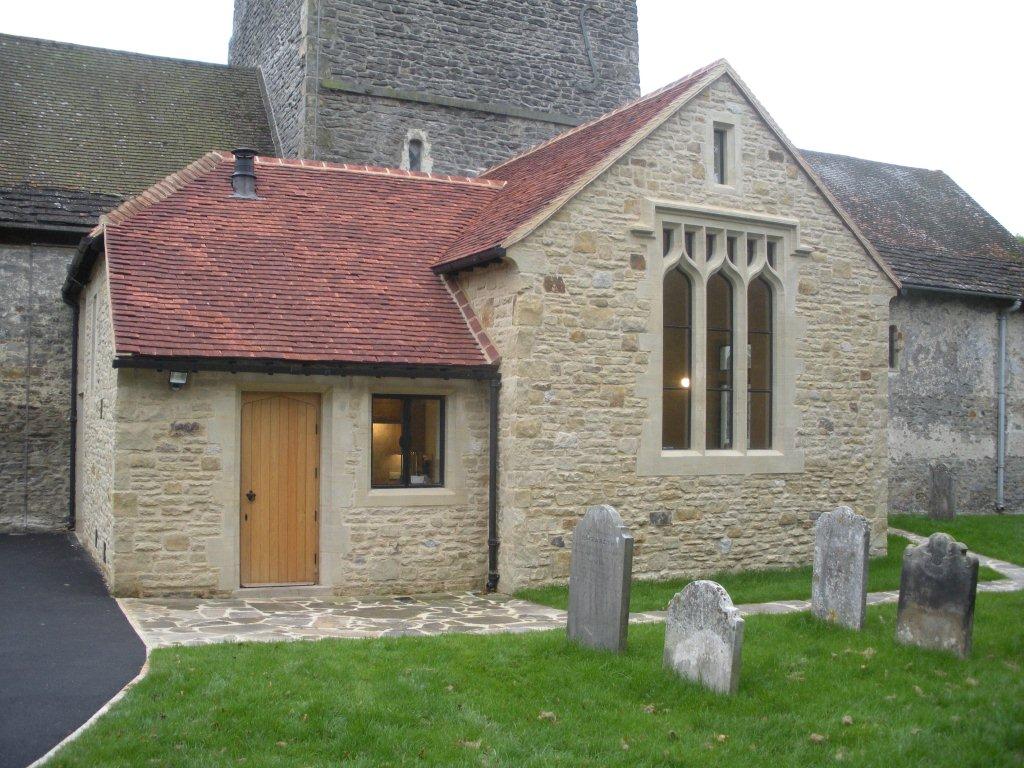 Since then there have been no significant changes, except that in 2009 a new extension was built on the north side of the church to provide a church room (the Nicholas Room), a toilet and a kitchen.  Adding to such a historic building, listed Grade 1, took ten years to plan, to consult all the experts, to obtain all the necessary permissions and - with a break to see off the threat of a new Gatwick runway - to raise the funds.

[1]  One theory is that the church may have been built to enforce Norman rule over local Saxon resistance. Read: A SAXON SPECULATION.

The pulpit is Tudor, with fine linenfold panelling.