A closer look at the evolution of St Nicholas' Church

The north Aisle and tower base are considered to be the oldest parts of the church, built around about the year 1080. The original form of the church is likely to have comprised a nave and a squat tower.  The Romanesque arch between the tower and the present north aisle are of this period, and there is a further survival of this period in the window above the arch which probably illuminated a priest room. There is also a Norman window on the north wall. 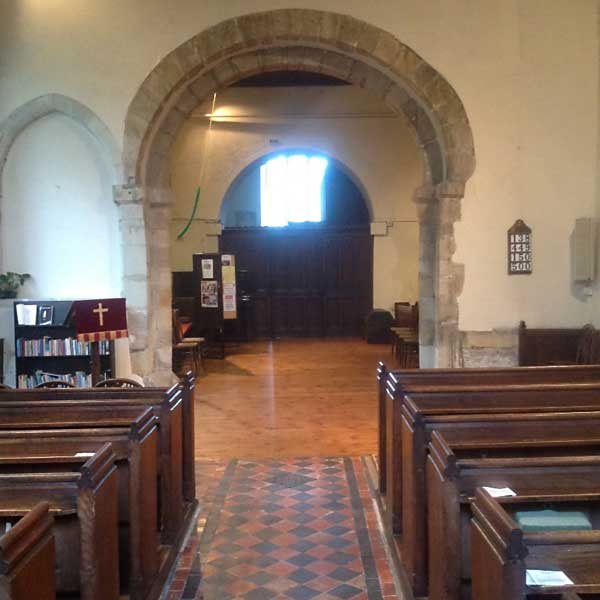 The walls are constructed of local Paludina limestone, probably from an old quarry in nearby Edolphs Copse.

In the nineteenth century it was assumed that the church had a rounded apse at its eastern end but no traces have been found: alternatively, it has been suggested that the eastern-most Norman-shaped arch originally framed a triple small window.  There may have been a southern transept but if so, it was demolished when the church was extended in 1480.

No traces of a northern transept were found when an extension was added in 2009.

In 2017 a blocked doorway in the ringing chamber was discovered that it is presumed led to a rood loft above the Norman arch where the faint outline of a door can be seen.

At the same time the removal of plaster on walls of the ringing chamber revealed the remains of a rough-cut arch on the eastern wall (above the eastern Norman-shaped arch).  The rationale of this arch remains unknown. 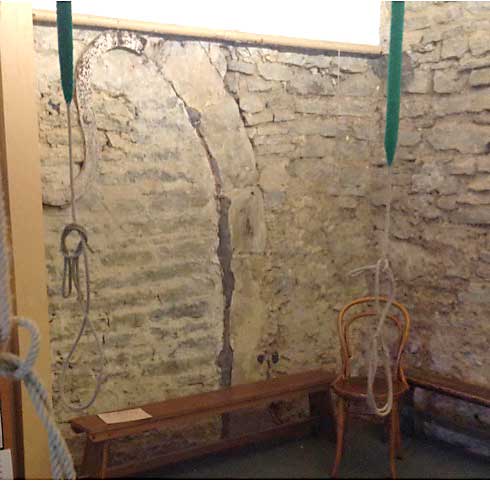 In about 1280, the church was enlarged by adding a new structure on the south side of the nave, possibly financed by the de Gatwyck family of Gatwyck manor in the parish.

The purpose of the new accommodation was to provide a chapel to the south of the then nave and the building was extended eastward to the western line of the Tower.

The piscine can be seen which would have served the altar in the Chapel.

Adjacent to the present pulpit position is a rare example of a two-light window incorporating plate tracery.

The present timber door is considered to be contemporary with this period, as is the top hinge – probably made from local charcoal-forged iron.

There are a considerable number of very fine wall paintings on the South wall which are believed to date from c.1300 and tell the stories of St. Margaret, St. Nicholas, and the three living and three dead.
READ MORE

Around 1310 a new window was set in the north wall of the Nave, adjacent to the Tower. Some twenty years later a large chancel was built (the present vestry).  It has a fine contemporary wooden roof, previously boarded.  On the eastern wall there are two niches for statues of saints. 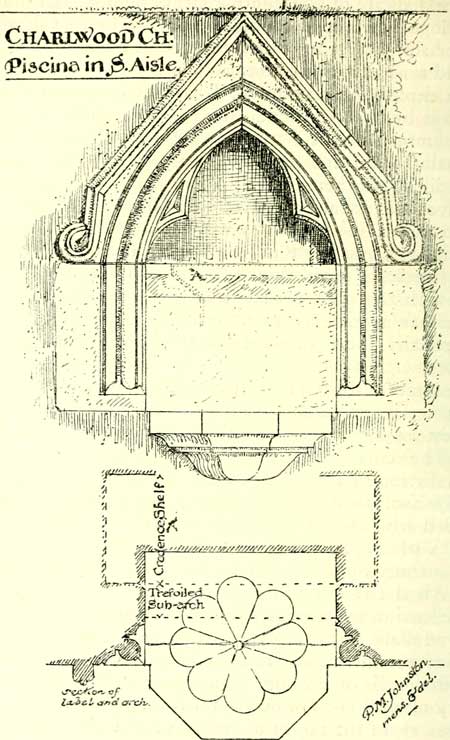 The next major period of building works is dated to 1480 and the construction of the Chantry Chapel for Richard Saunders. The Saunders family were important members of the Court of Anne of Cleves, Henry VIII, Queen Mary and Queen Elizabeth. Sir Thomas Saunders (grandson of Richard) held the post of Remembrance Treasurer (chief legal officer).

The top part of the outstanding chancel screen may have originally enclosed the Saunders tomb. It was placed in its present position sometime during the 18th century.

The west window in the current north aisle (then the nave) also dates from this period as does to south porch.

The roof over the current south aisle was probably constructed in about 1480 but is of similar form to that over the present north aisle, which may be earlier.

The pulpit is a mixture of Tudor and Jacobean woodwork. In 1716, a gallery was erected for musicians at the western end of the south aisle, with perhaps another gallery against the northern wall of the north aisle.

An oak chest originally contained the baptism, marriage and death registers which date from 1595. 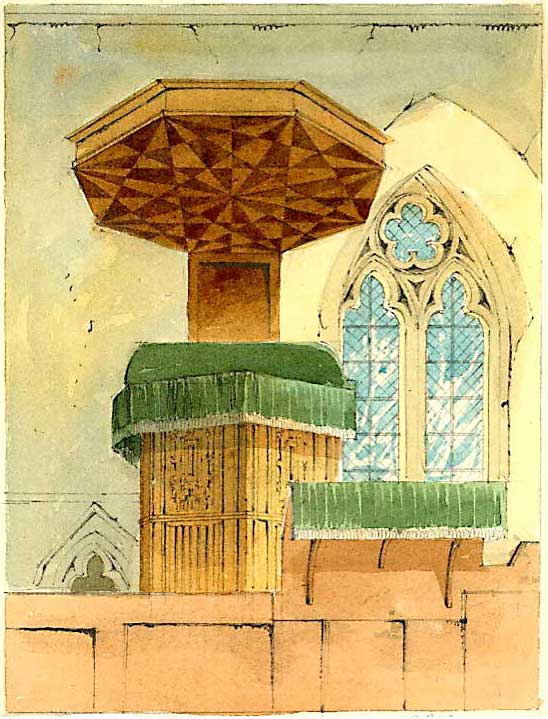 The artist John Hassell painted several pictures of Charlwood church in c.1820.  This one shows the sounding board above the pulpit.

The next major works were undertaken in the mid-19th century by the rector, Thomas Burningham, to designs by William Burges, one of the leading ecclesiastical architects of the Victorian Gothic Revival.

At St Nicholas’, he changed the internal arrangement of spaces in the church to the present arrangement by re-modelling the Saunders chapel to form the chancel, and the south aisle to provide a nave. The original nave became the north aisle and the chancel the vestry.

A Holdich organ was installed.  The music gallery was removed.  New pews were installed.  As the pulpit was in the only position to command a view of the whole congregation, the pews to the front and east were set to face each other.   This work was not completed until the 1880s.

At this time the wall paintings, which had been white-washed over at the Reformation, were re-discovered. 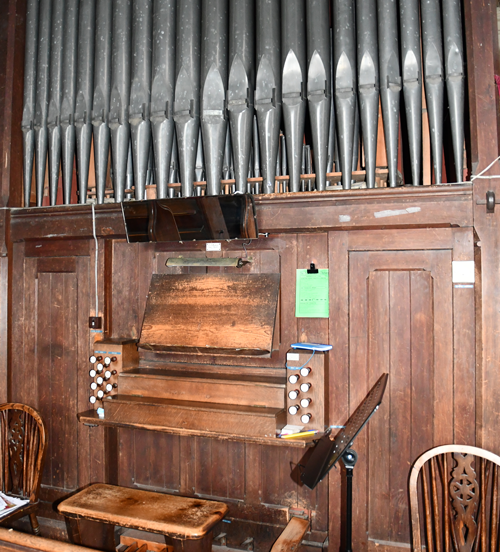 The reredos behind the altar was made in 1935.

The last part of major changes to the built form of St Nicholas’ is the addition in 2009 of parish accommodation on the north side of the Tower, built in Wealden sandstone.  New lights were installed in 2019.

The church stands in a large churchyard with a rural aspect, being surrounded by fields and trees.  An ancient yew dated to c.1,000 was sadly half-destroyed by fire a few years ago:  it possibly marks the site of a previous wooden Saxon church.

There is a wide path made of local stone (Paludina limestone) and listed grade 2 in its own right.  The lych gate, also listed, is thought to be C18.

There are some fine tombs as described in the listing description below. 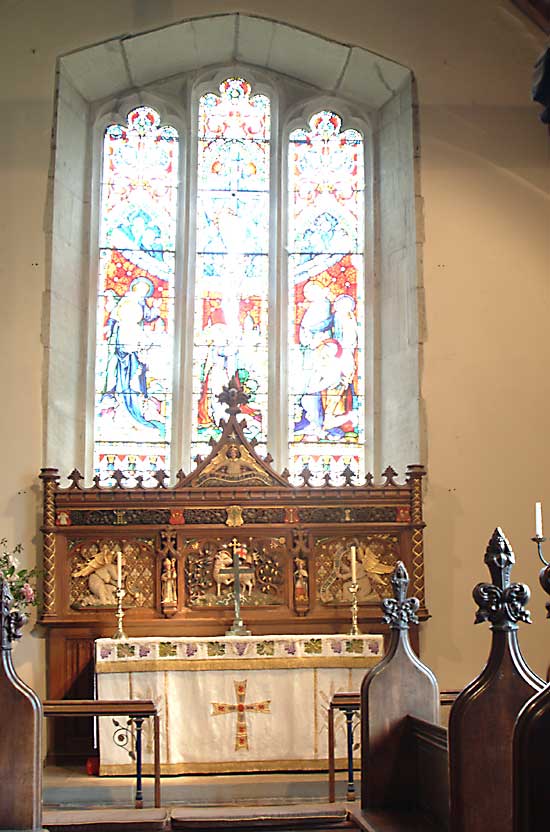 St Nicholas’ is Listed Grade I (of national importance).  The Listing description is quoted below.

Norman, late C13, C14 and C15. Built of sandstone rubble with dressed sandstone quoins and jowls and roof partly of Horsham stone and partly of clay tiles. Chancel with South Chapel, Central Tower, Nave with Aisle and South Porch. The original church was the north section of the present building, consisting of a Nave, a Central Tower and a Chancel, which were Norman. Both arches of the Tower and most of the Nave are of this period. The Chancel was enlarged in the C14 and the South Aisle, now the Nave, was added in the late C13. The South Chapel, now the Chancel, was built by Agnes, widow of William Richard Saunders about 1480 and the South Porch was also added in the late C15 and restored by William Burgess in 1858. The South Porch has a stone sundial dated 1741. Crown post roof. C15 parclose screen. Late C13 wall paintings in the South Aisle of the Nave. Brass in Chancel. The churchyard has a good series of C18 chest tombs, some having sculptured marble panels, C19 oval bodystones early C19 headstones with palm fronds and acroteria motifs or cherub motifs and wooden headboards. (See Nairn and Pevsner “The Buildings of England. Surrey” pp 119-121). 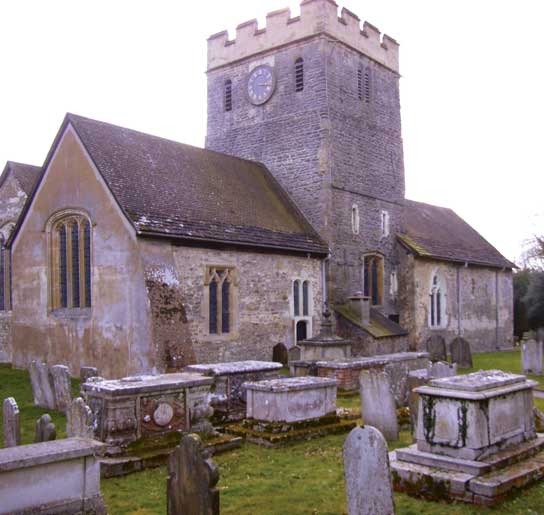 Charlwood was a peculiar of Canterbury until 1846, when it was transferred to Winchester. By the rearrangement of dioceses in 1878 it was again transferred to Rochester and was added to Southwark on its creation in 1905.

St Nicholas’ Church is currently a joint benefice with Emmanuel Church, Sidlow.  The role of Rector was suspended in 2016, pending a review of the clergy housing, and the present incumbent, The Rev Sue Weakley, is Priest-in-Charge.

The church of St Michael and All Angels at Lowfield Heath, built in 1868 to designs by Robert Burges, was a Chapel at Ease of Charlwood - served by the Charlwood rector or curate - until the 1970s when, following a change in local government boundaries, it was moved into the diocese of Chichester. At present it is used by the Seventh Day Adventists. 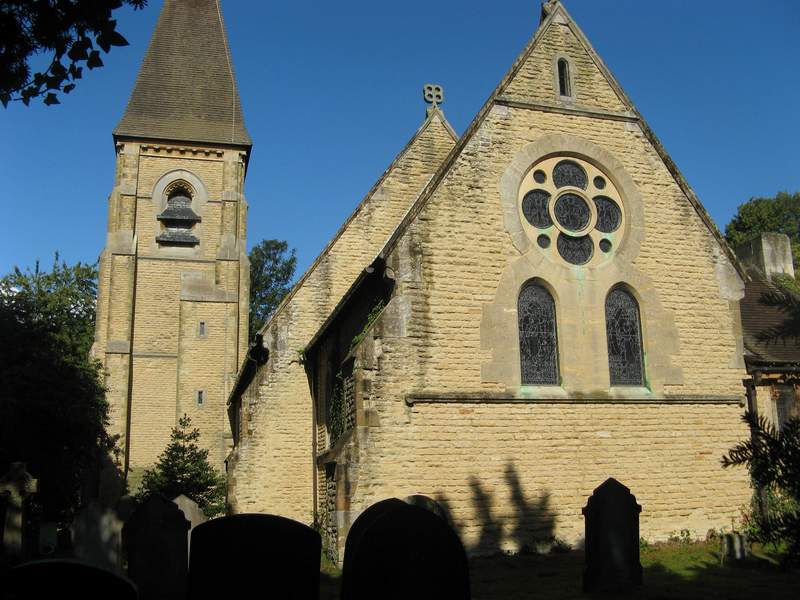 The church of St Michael and All Angels at Lowfield Heath

Ruth Sewill and Elizabeth Lane.  The Freemen of Charlwood. 1950. http://www.charlwoodsociety.co.uk/resources/The%20Free%20Men%20of%20Charlwood.pdf