An extract from 'Tangled Wings' by Brendon Sewill 2012

At the time of the Norman Conquest, Charlwood lay in the middle of the Surrey-Sussex Weald, a wilderness of bogs and brambles.  Apart from one circular field on the side of Norwood Hill, there is no evidence of a Saxon settlement.  So why did the Normans, in around 1080, build a comparatively large church here? It is often thought that when William had won the battle of Hastings he had conquered England.  It was not so easy: there was still a great deal of Saxon resistance.  William marched first to Canterbury and then, his scouts reporting that the bridges over the Thames in London were stoutly defended, marched west along the North Downs to Winchester.  From there he moved to Wallingford, and crossed the Thames in order to take London from the north. [1]

After Hastings the Saxons mounted a half-hearted rearguard action, at a site not yet discovered by archaeologists, following which the remnants of Harold’s army must have dispersed into the Weald.  Williams of Poitiers, writing c.1070 describes how they fled from the battle ‘some on horses they had seized, some on foot; some along roads, others through untrodden wastes.’ [2]   Some may have slunk off home, others camped out in the woods.  There they may have been joined by the stragglers from Harold’s rapid march down from Yorkshire.  Indeed it is recorded that at the battle of Hastings Harold had available only one third or one half of his intended force.  The stragglers and survivors would have been horrified and enraged by the reports of the burning, looting, and rape carried out by the Normans.  The Normans, according to one of the main historic sources, ‘laid waste Sussex, Kent, Hampshire, Middlesex and Hertforshire, and did not cease from burning townships and slaying men.’ [3] 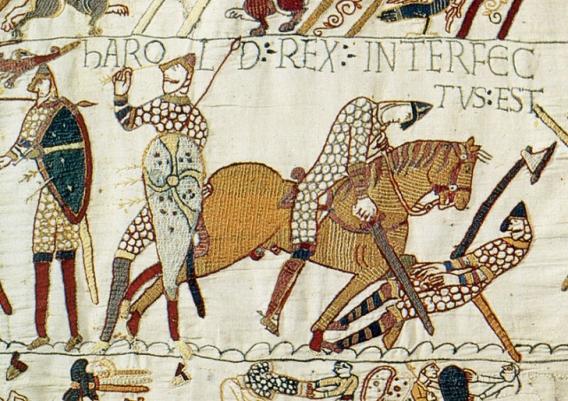 Perhaps some remnants of the Saxon army eventually congregated in the woods and ‘untrodden wastes’ around Charlwood, and waged guerrilla war from there.  The village at that time may have been a local centre for the smelting and forging of iron.  (There is a piece of iron slag in the west wall of the church built in around 1280.) Charlwood would have been a good strategic position, cut off from most directions by the River Mole and by two tributary streams, Deanoak Brook and Mans Brook, cut deep into the soft clay which, as I know from my foxhunting days, would have been virtually impassable for knights and their horses.  Perhaps the name ‘Charlwood’ - the wood of the men who owed allegiance to no lord - made it a natural place to rally, or perhaps the village acquired its name at that time.

In the five years after the Conquest, as is well documented, William had to undertake campaigns to subdue the Saxons in the West Country, in the north of England, in Herefordshire, and in Ely where Hereward the Wake took his last stand.  The men of Kent ‘goaded by Norman oppression’ plotted to seize Dover castle. [4] 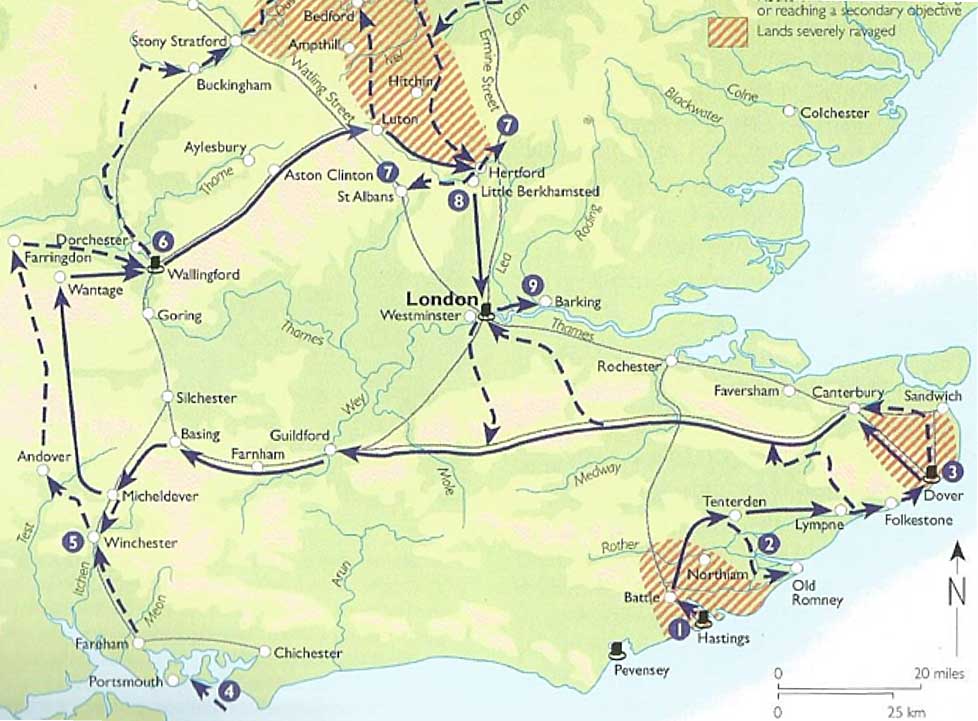 Map showing Harold’s route from Hastings to London [from Campaigns of the Norman Conquest.  Matthew Bennett.  2001]. Charlwood lies at about the ‘e’ of the River Mole, and might be where the Saxon survivors of the battle of Hastings congregated.

There is no written evidence, so far as I know, of a similar uprising in the Weald but it is my supposition that Charlwood became a centre for what would now be called ‘insurgents’, and that a contingent of Norman troops was also sent down to round them up.  Afterwards, as happened elsewhere in England, the church would have been built by forced Saxon labour to impress and subdue the locals.  Indeed the church, with its high slit window, thick walls and strong squat tower, could well have doubled as the defendable barracks for the local Norman militia.  This theory is slightly buttressed by two facts.  First, that Charlwood parish became a ‘peculiar’, a detached outlying parish, of Canterbury.  Second, that despite its comparatively large church, Charlwood is not mentioned in the Domesday Book, compiled in 1085.  The Saxon church at Worth, about five miles south east of Charlwood, wasrecorded. Maybe Charlwood church had not been built by Domesday time, but one would still expect to find a sizeable settlement worthy of inclusion in such a comprehensive survey.  The explanation given in various books on local history is that Charlwood was a sub-manor of Merstham (about eight miles north of Charlwood).  The Domesday Book shows that the Archbishop of Canterbury held Merstham ‘for himself, for the clothing of the monks.  Before 1066 Merstham answered for 20 hides; now for 5 hides.’ [5] A hide was about 120 acres, and the reduction in the area of farmland was probably a sign of the ravages caused by the Norman Conquest – indeed

Merstham lay on the route taken by William’s army from Canterbury to Winchester. Merstham was recorded as having one church and a population of 21 villagers, 4 smallholders and 8 slaves (slavery was common in Saxon times but died out soon after the Conquest).  It hardly looks likely that this included Charlwood.  Therefore my supposition is that perhaps Charlwood was excluded because it had acquired a reputation as a centre for Saxon resistance.

It is my further supposition that in the following centuries Charlwood church became something of a place of unofficial pilgrimage to the memory of Saxon England.  Footpaths lead to the church for ten miles across country from all directions.  Charlwood remained rebellious, and refused to recognise the Archbishop of Canterbury, Thomas Becket, when he returned from exile in 1170.  On Christmas Day the Archbishop excommunicated the Rector of Charlwood, along with a number of bishops.  ‘May they all be damned by Jesus Christ’ he intoned as he took flaming candles from the altar and hurled them to the floor. [6]   Four days later the Archbishop was murdered in his cathedral.

I now think that, before the present church was built, there was probably a wooden Saxon church, perhaps to the east of the yew tree, and that the footpaths led to that church

Another piece of evidence for my theory lies in the church murals, painted around 1280-1300.  Whereas many churches have paintings showing the day of judgment, the Charlwood paintings tell various lively stories.  One has to ask why the rector at that time chose these particular subjects.

BS. 2020. As for the wall-paintings, I have needed to revise my speculation following the very expert lecture by Tanya Heath in November 2019. The choice of subjects for the paintings would not have been with the rector but with the rich knight who in 1280 had that part of the church added.  If he had the Norman name of de Gatwyck he would hardly have chosen anti-Norman propaganda.  Tanya made it very clear that the paintings were subjects of adoration and worship, not just pretty artwork.  Nevertheless the artist clearly chose to treat the chosen topics in ways which the ordinary men and women would understand from their everyday experience.  Thus the Charlwood wall-paintings may well represent how the local population felt about Norman rule.

The main picture tells the story of St Margaret.  A heathen lord asks her to marry him, or more likely to share his bed that night.  As a good Christian, she refuses.  He throws her into prison.  She is tempted by the devil in the form of a dragon.  He says to her:  ‘Be a sensible girl; just lie on your back and shut your eyes.’  When she rejects this friendly advice the devil-dragon swallows her.  She makes a sign of the cross inside the creature’s belly and miraculously pops out.  It was a fashionable moral tale in the Middle Ages, and St Margaret became, somewhat illogically, the patron saint of women in childbirth.

In the Charlwood painting, however, it is easy to see that the lord is a Norman knight, out hunting on his horse with his greyhound chasing a hare (the earliest picture of hare hunting in England), with his very Norman standard bearer out in front.  St Margaret can be seen as a fair-haired Saxon lass resisting his advances, determined to keep her racial purity.  (Even in recent times miscegenation was a crime in many American States, which is why Barack Obama was born in Hawaii).  Margaret’s prison sufferings could be seen as those of the Saxon populace, and her miraculous escape their hope.

The end of the wall-painting story is, however, curiously tragic.  Margaret is tried in a court where the judge orders her to be executed, her head is cut off and her soul in the shape of a dove is seen flying up to heaven.  While this final scene does occur in the standard version of the legend, the hidden message would not have been lost on the pro-Saxon congregation: that in Norman England there was no justice for the innocent.

As twelfth-century writer Orderic Vitalis recorded: ‘Meanwhile, the English were groaning under the Norman yoke  ... the [Norman lords] were so swollen with pride that they would not deign to hear the reasonable plea of the English or give them impartial judgement.  When their men at arms were guilty of plunder and rape they protected them by force, and wreaked their wrath all the more violently upon those who complained of the cruel wrongs they suffered.’ [7]

Another Charlwood wall painting shows three princes meeting three skeletons.  The skeletons utter a grim sound bite.  ‘As you are, we were.  As we are, you will be.’  The story of the Three Living and the Three Dead was popular in the Middle Ages, especially after the black death:  fourteen other churches in England have a similar picture.  But the Charlwood picture was painted before the black death, and Charlwood is the only church in which the princes are on horseback, one with a hawk on his wrist.  They are clearly Norman knights and I like to suppose that the clandestine message to the Saxon congregation is that sure enough in due course the Normans will get their comeuppance.

Admittedly the walls were painted two hundred years after the Conquest, but folk memories live long, especially in relation to land seizure.  One only has to think of Kosovo where the Serbs are still re-living the battle of 1389 against the Ottoman Turks, or Northern Ireland where resentment at the Protestant settlements has continued for hundreds of years and cost thousands of lives.

…… also the churchyard.  Around 10,000 people, including our Saxon forebears, are probably buried in Charlwood churchyard, and a number of their descendants still live in the village.  The calculation is simple, and applies to any ancient country churchyard.  Age of churchyard 930 years.  Average life expectancy say 40 years (perhaps less taking account of the large number of infant deaths).  Number of generations 23.  Average population around 500.  Deduct a few for cremations in the past century, and QED, as we used to write in our school mathematics homework, around 10,000 people are buried in the churchyard, most of them waiting in confident expectation of rising out of their graves on the Day of Judgement.